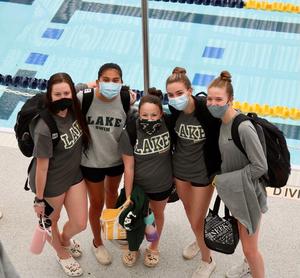 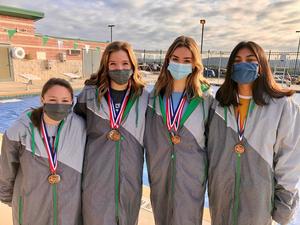 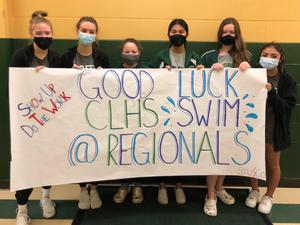 Even in the face of losing their backpacks, uniforms and equipment which were stolen from their bus, the six students and two coaches of the Canyon Lake High School swim team found a way to compete in the finals of the 5A Region VII meet. They even broke two school records.

When the school bus, carrying their belongings, including uniforms and equipment, was broken into before their regional meet Thursday, they were not deterred. Instead, the Canyon Lake High School girls swim team and coaches rallied, found new gear and competed, even breaking two school records.

“We’ve talked to our students all year about fighting through every obstacle and performing through adversity,” says Kimberly Moses, one of the team’s coaches. “That is exactly what they did. Our ladies walked into the natatorium early in the morning as athletes and walked out late in the evening as champions.”

The six swimmers and two coaches began the day early in the morning at the Josh Davis Natatorium and Bill Walker Pool in San Antonio for the 5A Region VII meet. They competed and earned spots in the finals in all four events which would take place later in the day. With some time to spend before the finals, they took a break from the pool for lunch. Locking up the bus in the parking lot of the restaurant, they enjoyed some time together only to return to their bus and find a window smashed and all of their belongings taken.

They immediately reached out to the district and police to let them know what had happened, and before they knew it, they had new swim equipment, a new bus and were at the natatorium for warmup and competition at 4 p.m. It never crossed their minds to just go home.

“After replacing six new swimsuits, six pairs of goggles and six swim caps, these ladies competed like never before,” says Moses. “We couldn’t be prouder of their accomplishments in and out of the pool this season. Though the bus was empty, our hearts are very full.”